Outstanding in the Central tourist route, Hoi An ancient town is as a rustic, simple and poetic picture. Whether day or night, Hoi An still carries in itself various attractive charms.

The best time to travel to Hoi An

The best time to travel to Hoi An is from February to April every year, it rains less and has a pleasant climate. Avoid going in summer because of the high temperature, very hot. The rainy season from October to November also has the disadvantage of wet space due to heavy and heavy rain.

Please visit Hoi An on the 14th, full moon day of the each single lunar month to attend the old town night. On this occasion, you will have the opportunity to see the red lanterns spreading throughout the town, a typical setting of Hoi An on the occasion of the festival

How to travel to Hoi An

Hoi An is located in Quang Nam but the nearest airport is in Danang (Hoi An is 30km from Danang). Currently airlines such as Vietnam Airlines, Jetstar, Vietjetair, Bamboo all operate routes from Hanoi and Ho Chi Minh City to Da Nang. If you want to buy cheap tickets, you should book about 3 to 6 months in advance.

From Hanoi or Saigon, you can take the North-South train to get to Danang. It takes about 14 to 20 hours to travel from these two cities. Fares range is from US$45 to US$60 for a hard/soft sleeper bus. When reach to Danang, you can take a taxi or bus to Hoi An.

Bus is the cheapest option to travel to Hoi An. You can ask your hotel/homestay’s staff to help you to book the bus ticket in advance or go yourself to the bus station and get the bus there. The fare is only about US$20 – US$30. Time is about 18 to 20 hours from Hanoi or Ho Chi Minh City to Danang/Hoi An.

How to get around in Hoi An

Hoi An has a full range of transportation services such as bus, taxi, motorbike taxi, cyclo. Motorbike rental is about US$7/day. But the most interesting thing when visiting Hoi An is walking or renting a bicycle around the neighborhood to feel the special features of this place. The price for renting a bicycle is USD1,5/day.

What are the top attractions in Hoi An?

Japanese Covered Bridge is the jewel in the heart of Hoi An. The bridge was built in the late 16th century and is called the Japan Bridge. In the middle of the bridge is a small temple to worship Huyen Thien Dai De. The bridge has a quite unique roof with decorative structures and patterns showing a harmonious combination between Vietnamese, Chinese, Japanese, and Western architectural styles.

Legend has it that the forerunner of the Assembly Hall was a small shrine worshiping the statue of Thien Hau Thanh Mau (the god blessing merchants overcome the ocean waves) which was picked up on the coast of Hoi An in 1697. Through repeated restoration, with the major contribution of Chinese from Fujian State, the Assembly Hall became more brilliant and spacious, contributing to the appearance of the ancient architecture of Hoi An.

The Assembly hall was built in 1845 by the Chinese in Chaozhou state  to worship the generals Ma Vien - a god who can controlled the waves and winds to facilitate the traveling and trading on the sea smoothly. The Assembly Hall has a special value for architectural structure with exquisitely carved wooden frames, along with wooden decorative motifs, incense sticks and beautiful porcelain embossed works.

The Assembly hall was built in 1885 by Cantonese Chinese, initially to worship Thien Hau Thanh Mau and Confucius, after 1911 to worship Quan Cong and Tien Hien. The rational use of wood and stone materials in load-bearing structures, decorative details has brought the Assembly Hall a unique beauty. Every year on June 24 of the lunar calendar, there is a very grand festival that attracts many participants.

The Tran Family's House was built in 1802 by a mandarin of the Tran family (a large family from China moved to Hoi An in 1700s) in accordance with the traditional feng shui principles of Chinese and Vietnamese people. Located on an area of ​​about 1500m2, with different parts: the place to worship ancestor, the place to exhibit related relics, houses... The Tran Family's House is an ancient house that remains intact ancient architectural form.

Established in 1989, the museum displays 212 original artifacts and valuable documents in ceramic, porcelain, iron, paper, wood... reflecting the development stages of the urban - commercial port of Hoi An from the time Sa Huynh cultural period (from the 2nd century AD) to the Cham cultural period (from the 2nd century to the 15th century) and Dai Viet and Dai Nam culture (from the 15th to the 19th centuries).

Built nearly 200 years ago, Tan Ky houses a typical architectural style of Hoi An townhouses with interiors divided into sections, each with its own function. The front of the house is the place to open a shop, the back is connected with the river wharf for importing and exporting goods.

The house is built by traditional materials and crafted by local carpenters and masonry, so it has its own characteristic: agile, elegant and cozy, and shows interaction with architectural style in the area. On February 17, 1990, the Tan Ky Old House was certificated National Historic - Cultural Monument.

Cua Dai is a beautiful beach, with fine white sand, blue water, small waves and available fresh seafood restaurants with cheap prices. Coming to Cua Dai Beach in the evening is also great because at that time the beach was immense, sparkling under the romantic oil lamps.

Location: Far from Hoi An ancient town 5 km to the East.

Coming to An Bang beach, you will feel the wonderful freshness when walking along the sand, catching the sunshine, watching the pristine beauty at dawn on the sea.

Location: Cam An ward, about 3 km east of the town

You can take a boat tour along the Thu Bon River. The two banks of the river have beautiful sand dunes, picturesque fields and mountains. In particular, the sunset on the Thu Bon River can make every visitor infatuated.

Location: Depart from the pier on Bach Dang Street, go through Hoai River and then Thu Bon River.

The artisan of Kim Bong carpentry village was once proud that their ancestors were invited to the capital by the Nguyen Dynasty to build and embellish the tombs and mausoleum. Coming to this trade village, visitors can admire the stages of manufacturing fine wood handicraft products.

Location: Located in Cam Kim commune, opposite Hoi An ancient town, across the Thu Bon river. From the old town ferry, it takes only 10 minutes to get there by boat.

In the 16th and 17th centuries, Thanh Ha was a very prosperous village, famous for ceramic and terracotta items being exchanged and wholesale throughout the central provinces of Vietnam. The pottery village originated from Thanh Hoa, after acquiring some technical capital, it has formed pottery village as today. Main products are utensils for daily life such as cups, bowls, jars, vases, pots, shapes of breeds ... with many designs, colors are very rich and specially, lighter than other local similar products.

Location: Located 3 km to the west of Hoi An (by boat about 30 minutes from the old town wharf)

The above is our some general information about Hoi An and some of the top attractions to visit in Hoi An. Book tours in Hoi An for you vacation at our website: https://azotour.com/tours/categories/vietnam/central-packages 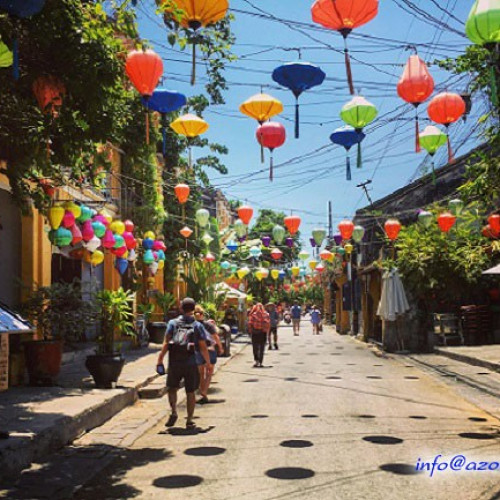 Hoi An - Things to do in Hoian

Hoi An is a famous ancient town that is kept almost intact with more than 1,000... 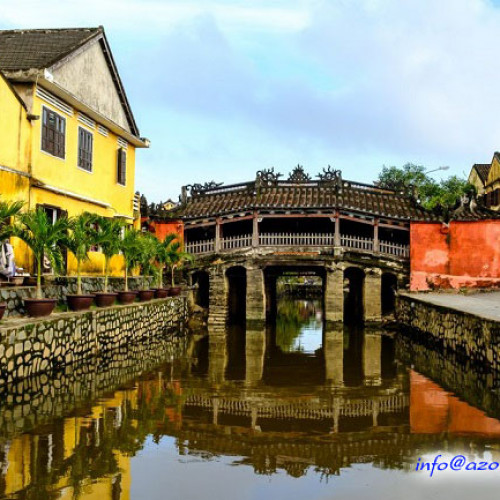 Hoian Ancient Town is considered as one of the most attractive destination in Vietnam,...